Barre chords are a staple in the guitar playing recipe book. They're mixed in the recipe to make almost any song you've ever heard. The barre chord is to guitars as salt is to cooking. Always there. Often unnoticed.
But barre chords are another thing too: the dip. The dip is the point in your beginning guitar career when things can get tough. When you may be tempted to get discouraged or, worse, quit. It's important to know that barre chords are tough - but you can get through them!
Here are 2 great articles we found that talk about how to beat the barre chord.

A barre chord is a chord in which you "bar" or "barre" a whole fret with your pointer finger. This acts sort of like a capo, making it so your pointer is playing the spots that your other fingers aren't. Of course, there's a good way to barre the fret. This will help you change chords easier, and not kill your finger as it continues to play these bad boys over and over.
So, set the bony part flat on the fret you're barre-ing. Your other fingers will form a set position then. This position is NOT to be forgotten -- as it will serve as the base for barre chords from here to infinity.
The rest of your fingers will form a set of stairs, essentially. So you have middle finger, ring finger and pinky left (after your pointer is barre-ing). 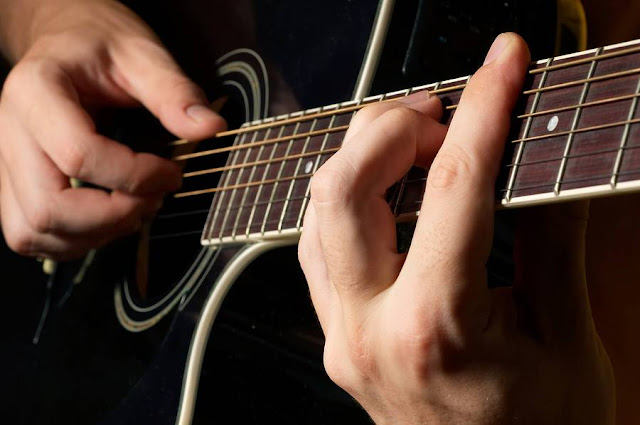 Article 2: Ways to Beef up your Barre Chords

Don't expect your barres to sound great right out of the gate. The ability to play barre chords is an acquired skill. Your fingers not only need to build strength, they also have to get comfortable with the chord shapes. Just like you learned to play notes and simple chords, learning to play barre chords is a process.
Learning to play barre chords can get a bit uncomfortable, just as learning to fret notes did before you built calluses. The important thing is to work through it. You will build the strength to play almost any barre chord. If your hand cramps, by all means take a break! - but do come back later.
Dedicate a portion of your practice session to barre chords. Make it a habit to practice every song with them. Start by replacing an open chord for a barre, then gradually add more barres to the song. Learn to switch from one barre chord to the next.

1.      Index finger placement. It's tempting to place the index finger at a slight diagonal so that it's further from the fret on the first string. But this will make the chord sound fuzzy! Make sure your index finger is straight and close to the fret.
2.      Proper pressure. While it's important to press your finger firmly down on the strings to make them sound, you don't want to push too hard and risk straining your hand. Keep the pressure as even as possible across all the strings, and experiment to see how much pressure you need to clear the chord without overtaxing your hand. Find the right balance.
3.      Break down the barre. Approach the barre like you would any task that seems overwhelming: break it down into smaller, more manageable pieces. Start with your index finger on the first fret, first string. Play the note four times. Next, barre the first two strings in the first fret. Strum those strings four times. Press hard enough so that each note sounds. Next, barre the first three strings in the first fret and strum. And so on. Once you play through the entire exercise, move to the second fret and repeat, then to the third, the fourth, making your way up to the twelfth fret and then back down again. Do this exercise daily to strengthen your fingers. Remember to shoot for quality, not speed.
4.      Start higher up the neck. If your fingers are really weak, try barring on the fifth fret. It can be much easier than starting on the first fret as the tension isn't as great. Try different places along the fretboard and see where you're most comfortable, moving closer and closer to the first fret.

You know first hand how frustrating it can be to play one of these beauties without buzzing or dead strings. Getting a barre to resonate brightly can be a real challenge, especially on an acoustic guitar. But with a little elbow grease, or rather, finger grease, and a whole lot of dedication, YOU can conquer the barre chord.

Posted by BlueTimbre at 18:13 No comments:

How to Hold Drumsticks Correctly 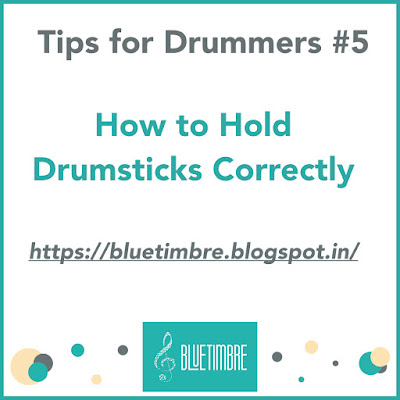 The most important technique a drummer must understand, is how to hold the drumsticks. Drum stick grip is very important and many drummers still fail to hold the drum sticks correctly. When holding the sticks correctly you are able to have maximum control over guiding your hands and striking your drum set correctly. The better grip you have the better output you will have in how your drums will push out sound. The quicker you learn how to hold the drum sticks the quicker you will learn to play the drums and soon you’ll be on your way to rolling the drum sticks in your hands like a pro!
To help understand the various methods that are popular, we have compiled information from two useful articles.

Article 1: Learn How to Hold Drumsticks

The most popular style is the Matched Grip. With this, both hands hold the stick the same way. Matched grip is very popular with all styles of drumming, and can be applied in more than just the drum kit. Timpani, mallets, and other percussion instruments use the matched grip as well. It allows for fast movement around the kit, and offers maximum control. This grip is played with your palms facing downward. Make sure you do not grip the stick too tightly, or you will limit its’ rebound. It is debated which finger is used to grip the stick. Some will use their thumb and index finger; others will use their thumb and middle finger. Both are fine, as long as you chose one early and stick to it!

The next grip we will look at is called the Traditional Grip. You may see a lot of jazz drummers using this style, for it is extremely popular with that style. With this, you hold the stick with your palms facing up, gripping the stick from underneath. This gives you a whole new feel of the stick. It allows for quick strokes, and better dynamic control; Perfect for brushes and brooms. One problem with this grip is moving it around the drum kit. With a bigger drum kit, you may find it hard to move quickly around the toms, and with the angle of the stick in your hands, hitting cymbals can be tricky. 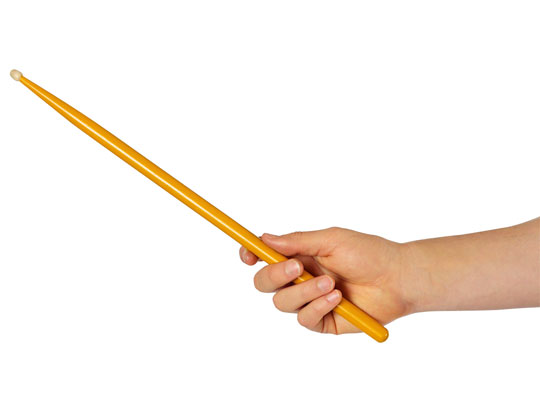 There is a few different type of drum stick grips. All drum stick grips differ from each other depending on the angle and degree of rotation. Typically you have an Germanian Grip, an American Grip and a French Grip
Germanian Grip is also very common for rock drumming and corps drumming. It involves holding your stick at the fulcrum point (balance point) with your thumb and index finger. What makes this grip unique is the angle in which you play with your sticks. Place your sticks on the snare drum, and try to make a 90 degree angle with them. When you find this angle, you will notice your elbows may point out a little.
American Grip entails having your elbows out and your sticks at a 90 degree angle. You will notice your sticks cutting an angle down to 45 degrees or so. This is the most common style of drumming, mainly because it feels the most comfortable. This grip is very common for rock drumming and corps drumming.
French Grip is different from American and Germanian grips. Let your arms relax and bring your sticks together so they are almost parallel. The French grip is different because the way you are holding your sticks changes from palms down, to palms up. This means you can achieve more speed by using your fingers. The only down side to this is the lack of power you will get from your strokes.
Summary
Be sure to try out every one of these techniques.  It is always good to learn all types of stick grips. Each grip is different and have their own benefits. Learning both matched grip and traditional grips will help you have better control and feel for the drum sticks. It will also better your performance when playing certain types of music or achieving certain types of songs as each type of grip achieves different types of sound when striking the drum. A great way to practice these different stick grips, is by incorporating them into your next drum practice.

Posted by BlueTimbre at 00:30 No comments:

Importance of Learning and Practicing Scales on the Piano

4 Reasons Why Playing Scales on Piano are Important

Piano scales often get a bad press. Repeated scale practice is often cited as a reason for quitting piano lessons among beginners. The simple fact is, though, that scales are incredibly important - it’s very difficult to become a really good pianist unless you master your scales and practise them pretty regularly.
The problem is that it’s very rarely explained to piano learners why scales matter so much.

1.     Muscle Memory - Trains your fingers to play common patterns found in music. When you have practised a scale for a while you will begin to ‘just get it’ and the scale will flow naturally from your instrument. What you have done is to begin to develop muscular memory. This is a very useful thing to have. When you see this scale again or indeed a similar one you will be able to rely partially on this muscle memory to help you play the scale. This also applies to snippets of scales, of which there are a lot in music.

2.     Dexterity – one part of learning an instrument involves training parts of the body to do new things, to repeat them and then do them very quickly. Scales are a great training partner. They will help you refine and improve your speed. Slow careful practice of scales at the outset will have you whizzing up and down in no time. 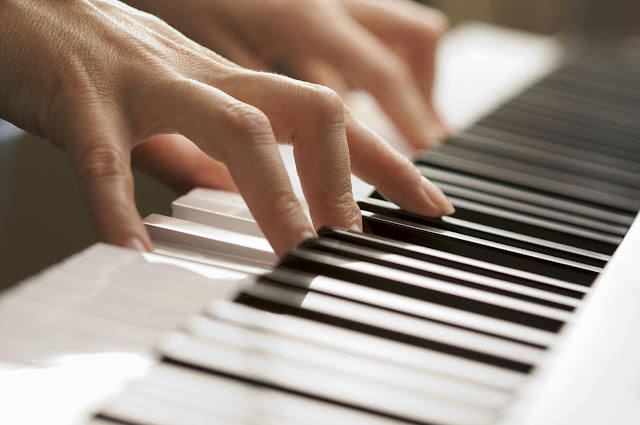 3.     Ears – if you can’t hear what is wrong you can’t correct it. This is true of all of your music practice. Learn to listen very, very carefully when you practice your scales and you will start to hear areas where you can improve your other playing. Pay attention to tuning, articulation, tone quality, consistency etc. Imagine what a perfect scale would sound like in every way and try to make each of your scales sound like that.

4.     Timing – to play together with other people you need to have good time, good internal time. One of the best ways to develop this is to practise scales. Slowly at first, with a metronome if needed until you are placing each and every note exactly where it needs to be, not too soon or too late – just right.

You can get ahead of the music practice game by taking your scales seriously and realizing that they are far from boring. In fact, there is a huge range of possibilities when you begin to think about it. Those that think scales are boring are on the track to slow progression. Realize the potential scales have to improve your music practice and you will be in the fast lane.